Although Barnard had described himself in an advertisement in Le Cernéen the local newspaper, for 9 March 1839 as a Miniature Painter and Engraver it seems that he had but little experience of engraving portraits, at any rate, miniature portraits; his attempts to copy the noble lines of the Heath’s engraving of the Queen’s head were crude. Nevertheless, there is about the design a simple charm which has perhaps in no small measure contributed to the popularity of the Post Office Mauritius with collectors.
Barnards initials, the minuscule letters ‘J.B.’, are engraved on the truncation of the neck of the effigy

Barnard chose a small copper plate about 3 1/4 inches by 2 1/2 inches, such as might be used for printing a lady’s visiting card, on which to engrave the design.

When it was realized that the correct wording should have been “Post Paid” and not “Post Office”, already 240 pieces of both stamps were printed and sold.

History of the Survived Stamps

Of this first print, only 26 pieces survived, 12 of One Penny cancelled and 2 mint, and 6 of Two Pence cancelled and 6 mint. The estimated value of these stamps are around 1 million Pounds Sterling, and will therefore hardly find their way into an ordinary stamp collection, but at least we can enjoy the sight of them.

In 1876 Major Edward B. Evans volunteered to serve with a battery that was posted to Mauritius. He took this step, no doubt, with the hope of being able to do something for philately in that island. While in Mauritius he wrote a learned paper on the stamps of the Colony.

While in Mauritius he formed a large collection of the Mauritius stamps. These included a very fine specimen of the One Penny “POST OFFICE” lightly postmarked on an entire envelope and several unused Two Pence “Post Paid” in indigo and dark blue. In 1885 when this collection was broken up, these (and many others) were bought by T. K. Tapling. They are now in the British Library.

Charles Howard, a collector, was wandering through an Indian marketplace in 1897 when he discovered another cover, this one bearing two copies of the 1 penny Post Office Mauritius. The cover had been sent from Mauritius to Bombay in 1850. It was purchased by George H. Worthington in 1906 and sold to Alfred F. Lichtenstein in 1917. Lichtenstein’s daughter, Louise Boyd Dale, obtained this rarity at the time of her father’s death. A price of $380,000 was paid for the cover by the Raymond H. Weill Company during the H.R. Harmer auction on October 21, 1968. An unused 2 pence was purchased by the prince of Wales (who later became King George V) in 1904; it is now in the Royal Collection at Buckingham Palace. Another unused 2 pence was sold at a Hamburg auction in 1972 for approximately $60,000. The total number of copies of both stamps believed to exist is estimated at 30.

Lady Gomm, wife of Governor Gomm used the first issue of the “Post Office” stamps to frank her invitations for the fancy dress ball of September 30, 1847. The envelopes of this invitations are known as the The Ball Cover. This cover is now in the British Royal Collection. 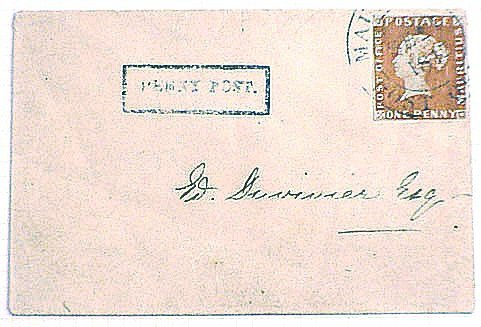 The 1847 Post Office Mauritius envelope is also known as the Ball Cover.
Lady Gomm used the first issue of the “Post Office” stamps to frank her invitations for the fancy dress ball of September 30, 1847.
The envelope shown here is part of the Royal Philatelic Collection

When a young French boy went through correspondence files in 1902, he could not realize that he was going to happen upon one of philately’s greatest rarities. He was searching through a batch of dusty letters when he saw a cover franked with 1 penny and 2 pence stamps from Mauritius.

It was last auctioned in 1993 and sold for 5 Million Swiss Francs. Read the complete History of the Bordeaux Letter.