Due to their high value, Mauritius stamps have soon become the object of forgeries. 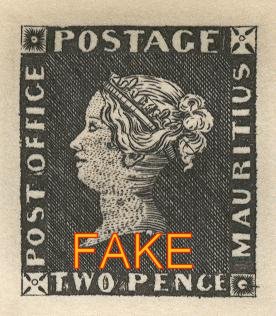 The ‘Post Office’ issue. Mauritius of 1847 (1d orange and, 2d blue) were of particular interest to forgers.

The original plate was bought in the summer of 1912 by Nevile Lacy Stocken, a London stamp dealer, from Colonel Colnaghi, the grandson of the Governor of Mauritius during the period spaning 1847 when the PO Mautitius stamps were prepared.

Colnaghi found the plate in the family archives but had no idea of its significance.it was stocken who prepared the reprints who supposedly printed “reprint” on the backs of each copy, but not all copies have this “reprint”.

The stamps pictured here were printed with the original plate in Paris in 1912 on Papier Japon. Although they do not have the “reprint” on the back, the paper is different enough for them to be easily recognised as not being the original.

The number of sheets printed with the original plates is not known, but they are rather rare and valued on their own merit by some collectors.